We will call him FS. In November 2014, FS flew to Accra, Ghana. He had ordered three infant chimpanzees through local wildlife dealers, and was flying to Ghana to arrange their shipping to Dubai. The three chimpanzees had been captured from the wild, prized out of their dead mother’s arms, stuffed into boxes and taken to the bustling capital city for export. FS makes his living selling orphaned apes to buyers in the Middle East – who will pay him up to USD 20,000 for a young chimpanzee to keep as a pet, or for the entertainment industry. These three orphans arrived in Dubai in March 2015, with no documentation. No questions were asked at the airport. He has connections in high places. 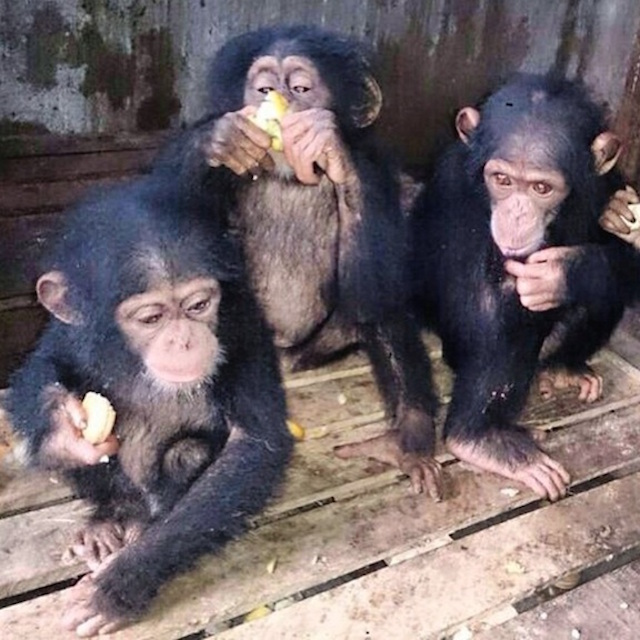 The three chimpanzees FS came to Ghana to buy

The Project to End Great Ape Slavery (PEGAS) has been following FS for almost a year. He shamelessly flaunts his illegal activities on his Facebook and Instagram accounts, posting photos of apes he has acquired from Africa and Asia for sale in the Middle East. PEGAS is supported by the Ol Pejeta Conservancy - who provide a refuge for chimpanzees lucky enough to be rescued from the pet trade. 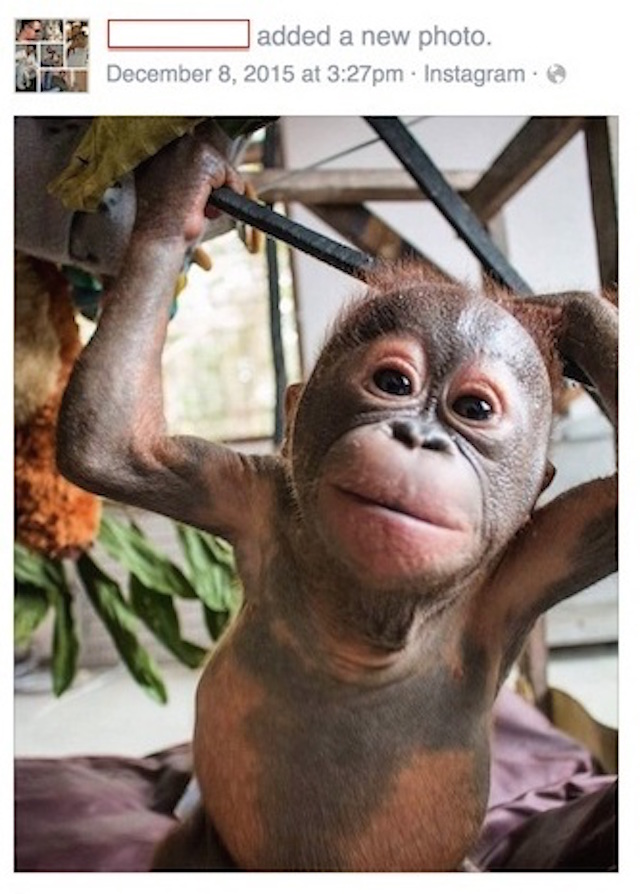 Dozens of wild animals have appeared on FS’s Instagram and Facebook pages since March 2015, most recently a baby orangutan. PEGAS has traced FS’s travels to Thailand, Russia, Ghana, Kenya and possibly China. His Instagram account has now gone private.

The illegal pet trade, particularly in the Middle East, is huge. The demand doesn’t stop at great apes, but extends to big cats as well, which are captured from the wild under similar, shocking circumstances as chimpanzees. FS is just one of the many wildlife traffickers that PEGAS has been tracking. They work closely with the Cheetah Conservation Fund, as they too try and gauge the scale of the illegal trade in big cats.

But identifying the dealers is just the beginning. As Dan Stiles, Project Manager of PEGAS says “knowing who the dealers are at the end of the trade chain is only part of the story. If the networks are to be shut down, the suppliers and transport routes and methods also need to be exposed.” 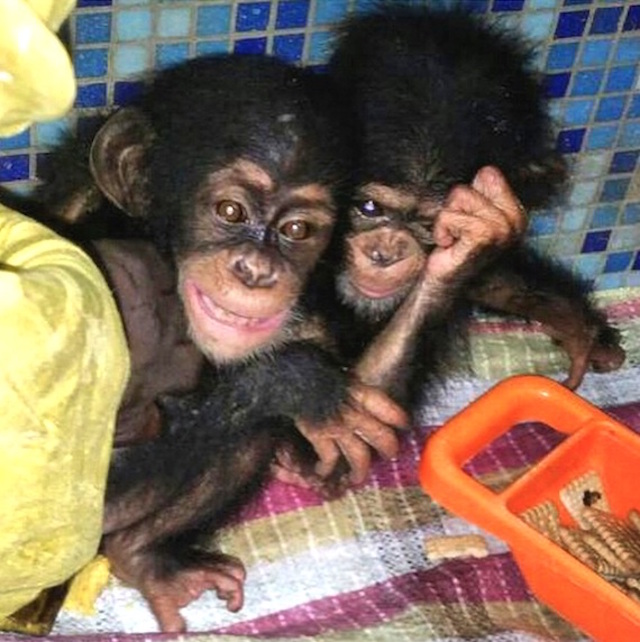 The three orphan chimpanzees from Ghana arrive in Dubai in March 2015, frightened and traumatised from the long-journey.

In late 2014, Dan went to Kinshasa in the Democratic Republic of Congo. His aim was to track down addresses that had been put on CITES export permits, to see if any could be verified as illegal great ape exporters. He had the support of a local assistant, provided by the environmental law NGO Juristrale. In the course of driving around the bustling and chaotic Kinshasa city, the team passed a stretch of roadside where primates, birds and other animals were displayed for sale. Seeing an opportunity, Dan ordered the taxi to pull over. He recounts what transpired:

“When we pulled over, two men approached the car. I instructed Fiston, my assistant, to ask them if they knew where I could buy a chimpanzee. I told him to tell them that I was from Dubai on a buying trip. On such short notice it was the best cover story I could come up with. It seemed to work, as they said that, yes, they could get me one. We agreed to return the next day and took their names and mobile phone numbers."

The red circles show monkeys and the blue ovals are around soldiers that protect the middlemen.

"Further down the road we encountered three more wildlife dealers and repeated the routine. After several visits with the two sets of traffickers, some carried out by Fiston alone, we learned quite a bit about how they operate. I used undercover video recording during some of the questioning sessions." 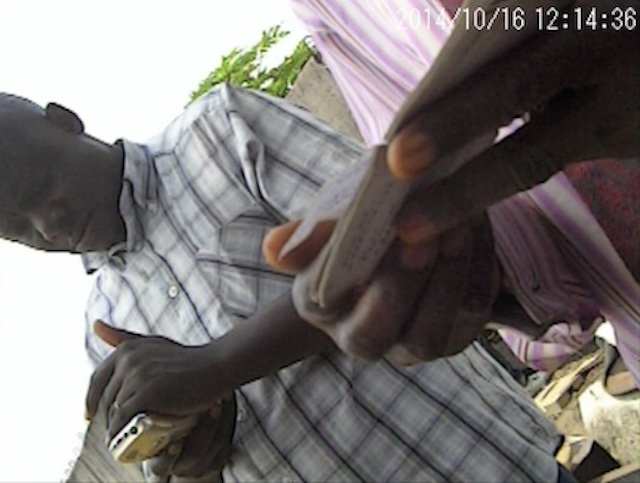 The middlemen are constantly on their mobile phones taking orders and putting out commands to their suppliers to bring in various species that they have received orders for.

A soldier comes to see that no trouble is caused

"The roadside where the animals are displayed is located next to a military base. We found out that the traffickers are all middlemen who sell the displayed animals on behalf of officers in the military base. More importantly, they take orders for protected species that cannot be displayed openly and make arrangements for the animals to be procured. In the case of great apes, they may have to be captured in the wild, but on occasion chimpanzee infants turn up with itinerant traders visiting Kinshasa from the interior. The middlemen were protected by soldiers from the base who patrolled in the vicinity of the traffickers. In fact, soldiers came to look at us while we were speaking with the middlemen, making sure we weren’t trouble-makers.”

Dan and the team found no chimpanzee during the brief visit to Kinshasa, as it takes two to three weeks to acquire one on order, but Fiston was notified of one that had arrived soon after Dan left the DRC. Before arrangements could be made to have it seized by the authorities, it was sold and disappeared. 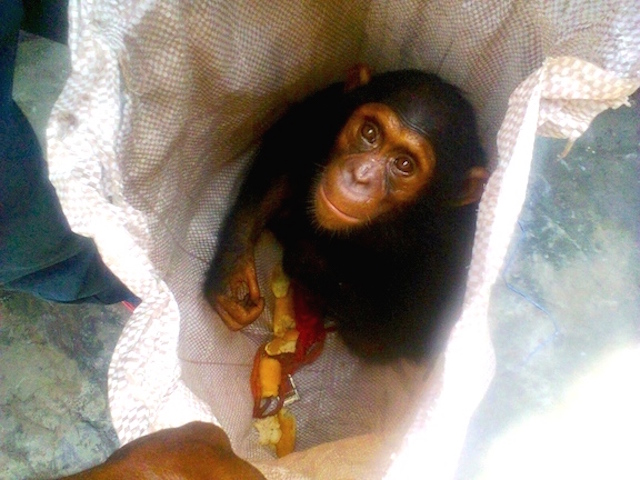 Based on intelligence gathered by PEGAS, chimpanzees and bonobos are being shipped down the Congo River on boats from Mbandaka. There is also evidence that western lowland gorillas and chimpanzees are being captured in the coastal Mayumbe Forest and being driven to Kinshasa from Boma. 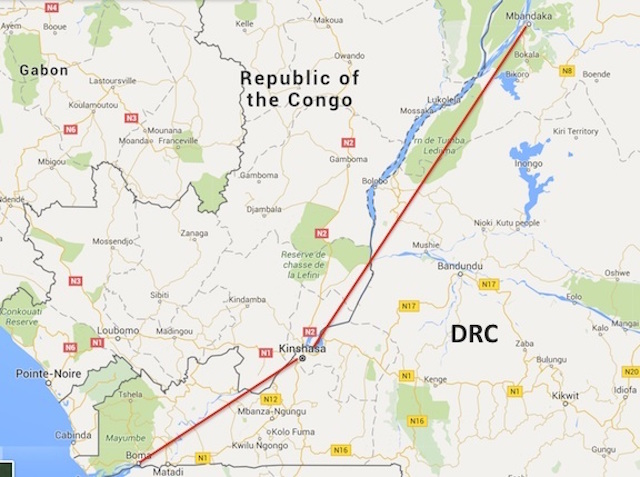 The red lines show the main trade routes from the Mayumbe Forest in the west and Mbandaka down-river in the north east.

PEGAS has prepared a report naming some of the Gulf area online traffickers, including FS, and providing their contacts. The report has been sent to national authorities, the CITES Secretariat and to INTERPOL, who have the power to take action. At the recent 66th CITES Standing Committee meeting, Dan met with high level CITES and INTERPOL officials to hand over more online links and discuss the problem.

"The solution is not an easy one" he says, "but at least now the authorities are working on it." 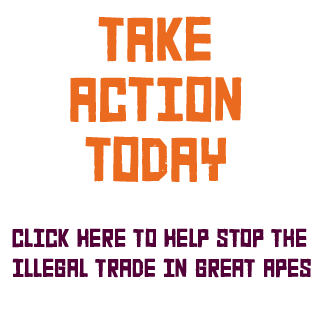 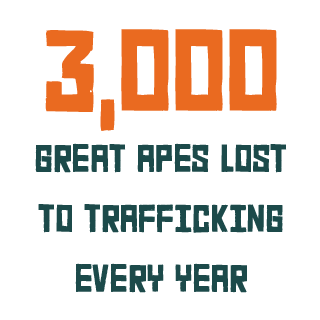