There are five main types of habitat on Ol Pejeta, and this diversity contributes to the wide variety of wildlife found here.

Why is it important?

The Acacia drepanolobium dominates the open bushland habitat covers 53% of Ol Pejeta’s 90,000 acres. This acacia is also known as the ‘whistling thorn’ – so called because of the sound the gall fruit makes when the wind blows through it. It is one of the most important habitats for Ol Pejeta’s black rhino as it is their primary food source.

The gall fruits of the Acacia drepanolobium are home to at least four different types of ants, which enjoy a symbiotic relationship with the acacia. The ants feed on a sweet sucrose-rich solution produced by the tree and, in return, protect the acacia by attacking any browsing predators such as giraffes. The tree is also home to the Patas monkey, who feed on the ants.

What is Ol Pejeta doing to protect it?

As well as being a food source for giraffe and black rhino, the Acacia drepanolobium is also eaten by elephants. These mega herbivores can cause large-scale destruction to open bush land habitat, and to investigate the effect this might have on wildlife, Ol Pejeta has established a monitoring programme in collaboration with Earth monitor Project. So far, about four A. drepanolobium exclusion zones have been established, which prevent elephants from accessing the trees. These zones were established in areas where low survival and high tree damage rates were recorded, to allow these trees to reach maturity. Tree planting was also carried out in these exclusion areas.

Dense bush land in Ol Pejeta is predominantly covered in Euclea divinorum (Euclea) - a fast establishing, unpalatable, fire resistant bush that is considered an invasive species in some parts of its range. Euclea bushes cover approximately 27% of Ol Pejeta’s total area, and has been gradually expanding in coverage over the past few years. So much so, that the tree is encroaching into A. drepanolobium (whistling thorn) woodlands; a key woody habitat for the endangered black rhino. The whistling thorn has been shown not to thrive in areas where Euclea has taken over, which is of concern to many conservationists. However, the Euclea has been observed to protect other woody species for grazing herbivores, due to its unpalatable nature.

What is Ol Pejeta doing about it?

Ol Pejeta is currently looking at establishing experimental plots to aid in identifying the best approach for controlling Euclea. Given that there is high woody species diversity in areas where it is present, Ol Pejeta propose to collaborate with a third party researcher to discover the control method with the least ecological impacts.

Why is it important?

Grass provides forage both domestic and wild grazers including the white rhino, and is a vital part of the Ol Pejeta ecosystem. Ol Pejeta uses livestock as an ecological tool to manage the grassland for the benefit of wildlife – in an innovative approach that allows wild grazers to benefit from nutrient rich grass as well as allowing the Conservancy to make an income from cattle farming.

What is Ol Pejeta doing to protect it?

The grasslands of Ol Pejeta frequently suffer from drought and overgrazing. Our Ecological Monitoring Unit (EMU) has established a proactive and adaptive management plan, and consistent habitat monitoring process. The conservancy is divided into 97 grazing blocks. EMU gathers information on the grassland conditions and dynamics and assess the potential of grazing or suitability for use for each block. This way, the unit can advise the livestock department on which blocks to graze on and which ones not to. The unit also advices on the intensisy and extensiveness of the grazing to be applied per block. This in turn helps to deal with overgrazing at any particular time.

Why are they important?

The riverine habitat covers about 5% of OPC habitat. Acacia xanthophloea (yellow fever tree) constitute the largest proportion of this habitat. These trees provide both food and shelter for many herbivores including giraffe, elephant, olive baboon and velvet monkeys.

Elephants are largely responsible for the destruction and degradation of yellow fever woodlands in Ol Pejeta. Elephants snap, strip and push over mature trees looking for food, and in large numbers can cause serious damage. Exposing the woody tissue of the tree by stripping the bark leave the tree susceptible to attack by boring beetles and other insects, which can eventually lead to the death of the yellow fever.

How is OPC protecting them?

The riverine habitat falls under the ‘special conservation zone’ in the Ol Pejeta Conservancy 2020 Land Use Plan. This plan will see stretches of woodland along the Ewaso Ngiro and Ngobit rivers be rehabilitated by reseeding, and these areas excluded from all browsers. Ol Pejeta hopes to erect protective game fencing around 3-5 hectare plots where a variety of riverine tree species are planted. Several exclusion zones have already been established in some high priority areas to limit access by the herbivores, and yellow fever seedlings have been replanted to complement natural regeneration.

Why are they important?

The marsh area supports a large variety of aquatic species; including birds, insects and herbivores such as waterbuck and elephant. Not much data has been gathered about the ecology of Ol Pejeta’s marshlands, and the Conservancy would welcome third party researchers with which to collaborate on this.

How is OPC protecting them?

The swamp also falls under the ‘special conservation zone’ in the Ol Pejeta Conservancy 2020 Land Use Plan. Ol Pejeta proposes to create additional swamps and marshes on the Kongoni, Murera, Kamok, Sidai and Loirugurugu drainage lines where water is impounded, so that water levels can be regulated to form a variety of habitats. 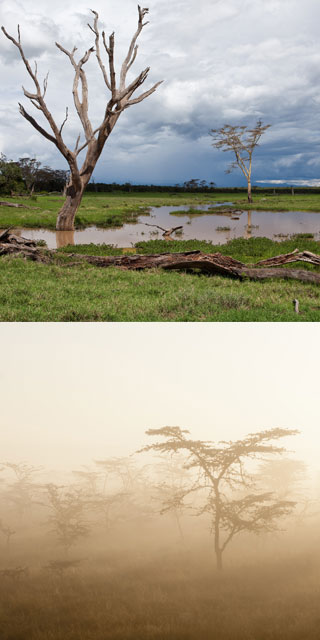