Thailand is known for its fabulous beaches, friendly people and great food. The Land of Smiles, as tourism promoters call it. But when Dan Stiles, manager of the Project to End Great Ape Slavery (PEGAS), took a trip to Thailand, he saw a very different side.

Part of the mission of PEGAS, supported by Ol Pejeta, is to uncover more information about the multi-million dollar illegal great ape trade. This was what Dan wanted to do on his trip to Thailand, where apes are paraded and enslaved for tourist photos and garish performances.

"Top of the list of great ape horror shows were the Safari World, Samut Prakarn Crocodile Farm and Zoo and Pata Zoo. None of these privately owned facilities are strangers to criticism and bad publicity. Many press articles and NGO reports and campaigns have been directed at them. What is surprising is that they continue to operate with impunity." Says Dan. 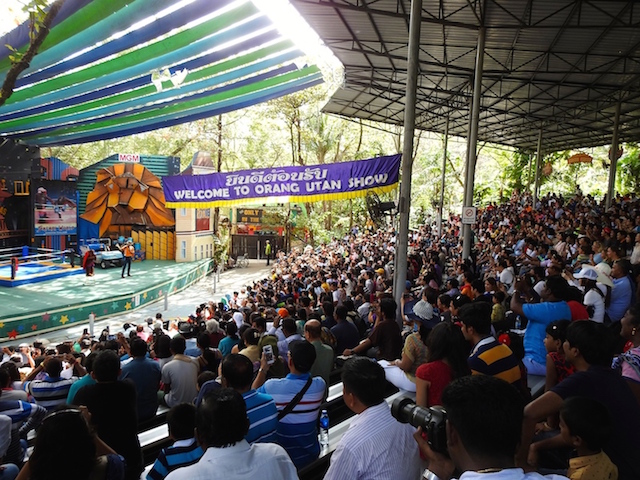 Safari World is located less than an hour from downtown Bangkok. Their daily Orangutan Show sees juvenile orangutans dressed as rock stars, pretending to play instruments. Following the music show, orangutans engage in a boxing match, while a very young chimpanzee rushes in and out acting the clown. This attracts huge crowds every day. 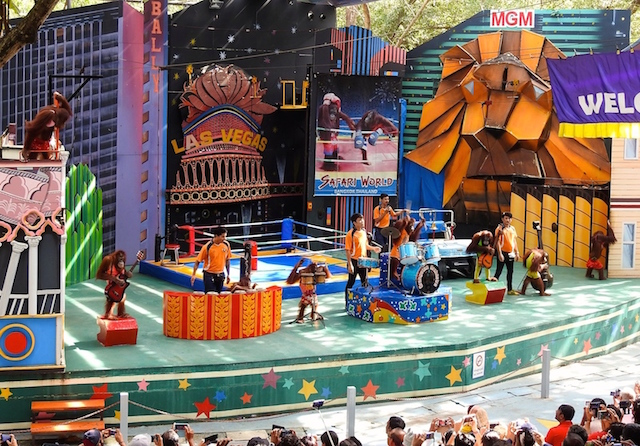 According to the CITES Trade Database, the last legal import of an ape into Thailand was in 2001. Furthermore, animal performances like the one at Safari World are actually illegal under Thai law. In 2004 the government seized 48 orangutans at Safari World for exactly this offence, and returned them to their native Indonesia. This was such a significant moment for Indonesian conservationists that the Indonesian president’s wife met the orangutans at Jakarta airport. "We are very happy to get the orangutans back," Kristiani Yudhoyono said at a ceremony. "They belong to our vast nation.” 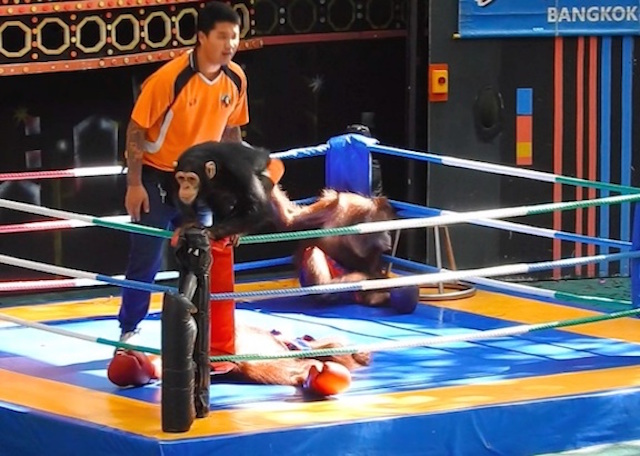 In November last year, a further 14 orangutans confiscated at a Phuket Island Zoo were repatriated to Indonesia. Again, no one was charged with any criminal activity.

Edwin Wiek of the Wildlife Friends Foundation Thailand was instrumental in having the Phuket orangutans confiscated and repatriated. At the time, he was quoted as saying “[the Department of National Parks] decision has sent a clear message to wildlife smugglers and zoos in Thailand that smuggled apes will never end up in the trade again.” 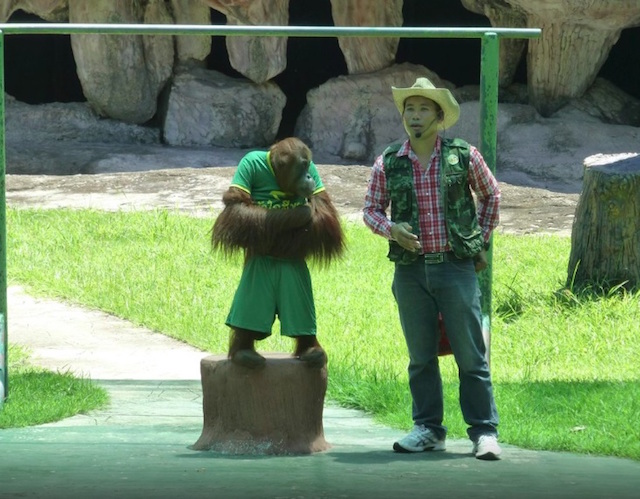 Apparently Safari World and the traffickers who supply them did not receive the message.

The owner of Samut Prakarn Crocodile Farm and Zoo missed the message as well. As soon as visitors enter they are met by baby chimpanzees, orangutans and tigers lined up in cages or cribs. For a fee, visitors can have their photograph taken with any one of them. Commercial use of great apes like this is supposedly prohibited if they are imported, as they are listed under CITES Appendix I. If they are captive born, the facility must be registered with the government and receive authorisation to breed that species, according to Section 17 of the Wild Animal Reservation and Protection Act of 1992. The crocodile farm might have permission to breed crocodiles, but certainly not great apes. 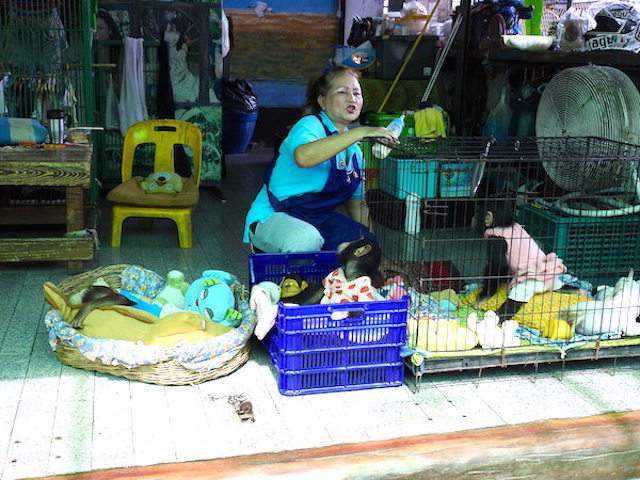 Never satisfied with just the exterior, Dan and his team went round the back of the Samut Prakarn Crocodile Farm and Zoo. Out of sight from the visitors, away from the garish shows, they found rusting cages that housed a pitiful orangutan and five forlorn adult chimpanzees. An employee said that eight more were kept in cages out of sight. 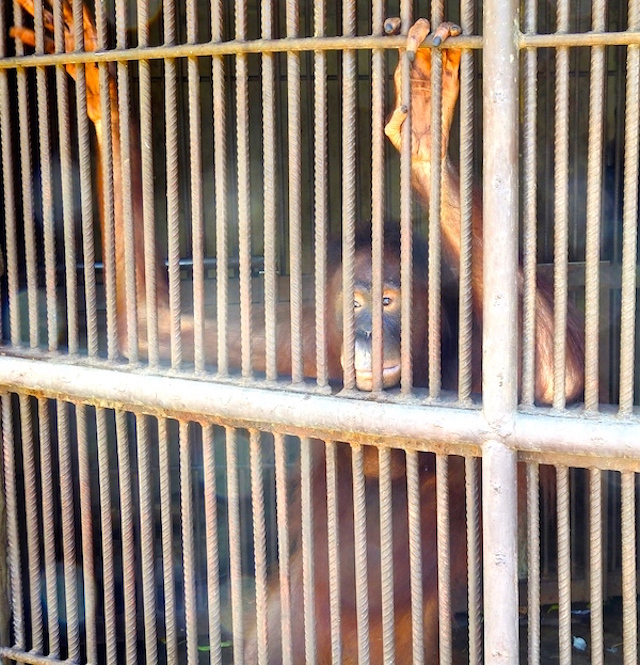 The next stop on the PEGAS tour of Thailand was the infamous Pata Zoo, opened in 1984 on top of a Bangkok department store. Its biggest celebrity inmate is Bua Noi, a female gorilla that, according to the International Gorilla Studbook originated in Guinea. Guinea isn't a native habitat for gorillas, nor did the CITES Trade Database have any record of a gorilla import from any country to Thailand. Bua Noi lives in solitary confinement, and tourists have even reported seeing her gripping the cage bars and shedding tears. 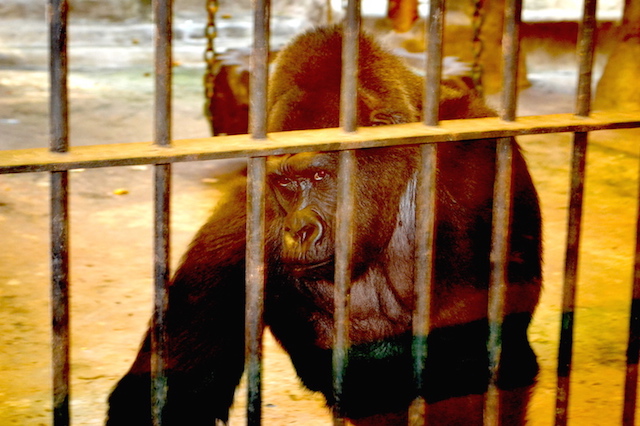 The Pata Zoo also holds five orangutans and three chimpanzees in cramped cages. It, too, puts on an illegal show, which includes an orangutan that lifts barbells. Young orangutans sit with minders outside waiting for tourists to pay money to have their photo taken with them. 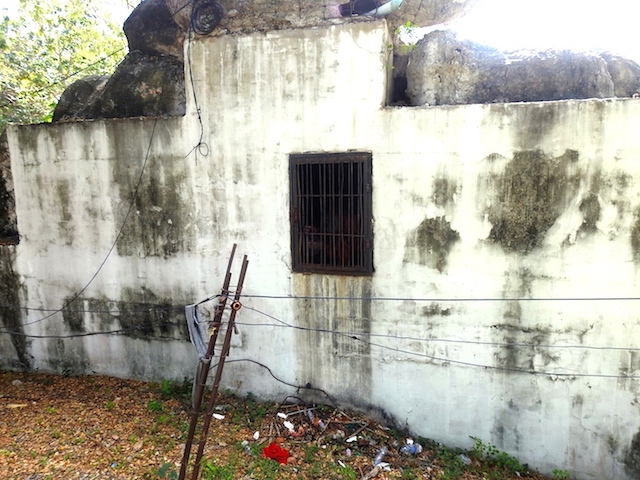 PETA Asia claims that “the conditions at the Pata Zoo are some the worst that PETA has ever encountered… The cages are extremely small and barren, and the animals are deprived of everything that is natural and important to them.” PETA has a campaign to close the zoo, but its license was recently renewed, and the zoo director Kanit Sermsirimongkhon said, “We have complied with all relevant laws". There is no CITES documentation to back up his claim. 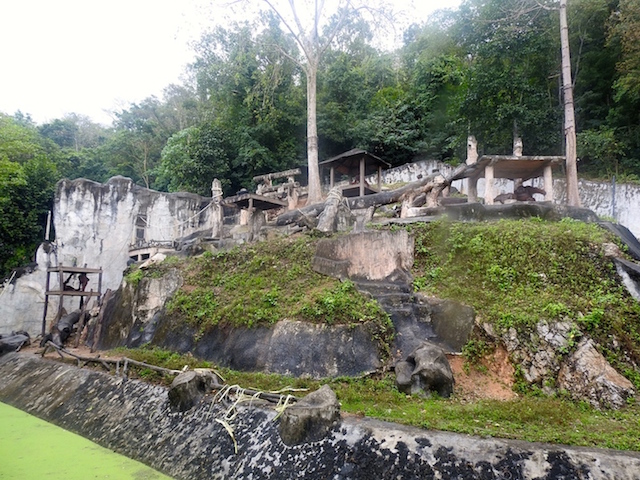 PEGAS visited several other zoos in Thailand, including Dusit, Lopburi, Khao Kheow and Korat. The seven orangutans and three chimpanzees found at Lopburi were living in dreadful conditions and are being used in illegal performances. PEGAS was somewhat surprised to find that those at the other zoos were actually living in well-designed enclosures, with landscaping and amenities that provided some sort of stimulation.

In all, PEGAS estimates that there are at least 41 orangutans, 38 chimpanzees and one gorilla in nine facilities. In some, the animals could not be seen at the time of the visit. There are other great apes located in facilities not visited. Judging by records in the CITES Trade Database, many of the apes were probably illegally imported, although some were most likely born in Thailand. However, unless the facility has obtained express permission to breed great apes, even those born locally could be illegal to possess. 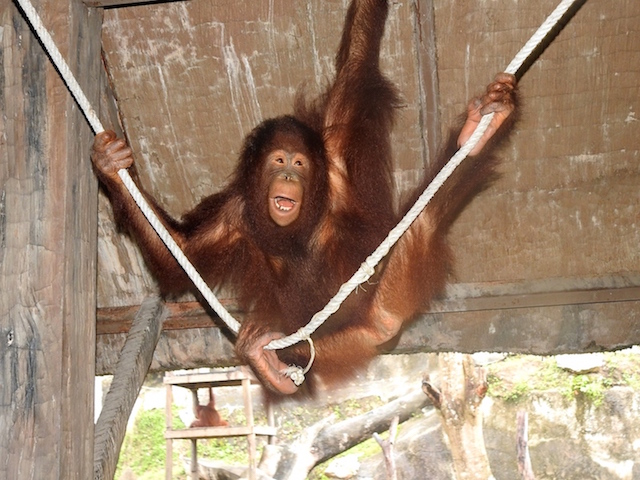 Why can’t the illegal exploitation of these sentient animals be stopped? As Edwin Wiek says, “It's big business. Influential people. There are ex-prime ministers that have chimpanzees and orangutans in their backyard. These are the kind of people that are opposing us."

Just as with the problem of online wildlife traffickers in the Middle East, the solution has to start at the top. "If the decision-makers in power are complicit with the crime, little can be achieved. Campaigns need to be directed at those at the very top of government. Only they have the power to change anything." Says Dan.