The Last Male Standing. The Most Eligible Bachelor. These are some of the affectionate epithets that were bestowed on Sudan over the years.  Born in the wild in Sudan in 1973, Sudan has subsequently evolved into a legend – in part due to his status as the last male member of a rhino subspecies. He was captured in Sudan shortly after birth in 1975 and taken to Dvůr Králové Zoo in the Czech Republic along with 5 other northern white rhinos.

He lived at Dvůr Králové Zoo until December 2009 when he was relocated to Ol Pejeta Conservancy together with three other northern white rhinos – Suni (deceased), Najin and Fatu. The move was prompted by the fact that northern white rhinos had been declared extinct in the wild in 2009. It was thought that a more natural habitat would overcome the rhinos’ reluctance to breed in captivity and thereby ensure the continued existence of this subspecies.

The deaths of Suni and Angalifu in 2014 – two of the three remaining males – suddenly brought the impending end to this magnificent species of animal to everyone’s attention. This left Sudan in an extraordinary position - the last male of his species. 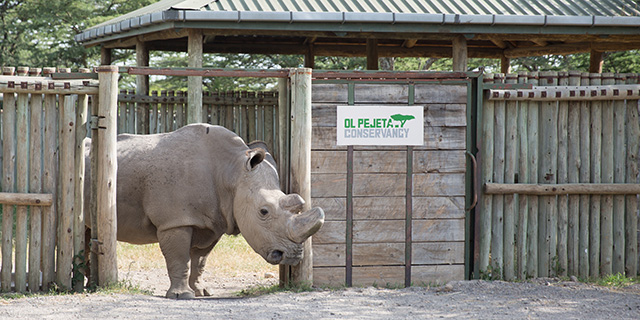 All hope for the future hinged on him – but,  sadly, in 2015 after a series of tests, it became clear that his days of youthful vigour were behind him [only two calves are known to have been fathered by him]. In any case, the females didn’t seem very keen on him in his old age, to the extent that they had  eventually  to be kept in separate paddocks. It became clear that any chance of further procreation was decreasing  with every year. After all, in human years, he would today be approximately 90 years old.

In 2015, Ringo, an abandoned southern white rhino calf, was introduced into the Endangered Species Enclosure. Ringo’s playful persona and energy rubbed off on Sudan and seemed to put a spring back into his step.  The sight of little Ringo gambolling along next to Sudan’s massive form and watching this little male marking his imaginary territory - seemingly being taught by his elderly uncle - was utterly charming, and one that brought a delighted smile to everyone’s face. Tragically, Ringo died an early death in 2016, leaving Sudan once again without a companion. Although his keepers and visitors paid him lots of attention, it just wasn’t the same. He truly missed the company of  the happy little creature he’d befriended over the last six months. Luckily, the setting up of Ol Pejeta’s new stables nearby led to him forming a surprisingly affectionate bond with some of the horses - they appeared have many an in-depth conversation through the fence.

In April 2017, Sudan made headlines as the most ‘eligible bachelor in the world’, when Tinder, together with Ogilvy Africa, featured him on the dating app as part of a huge fundraising campaign. They were able to raise US$85,000, which helped enormously in the effort to support rhino IVF and rehabilitation.

Despite his later inability to breed, there is no denying that he now goes down as the most prolific rhino ambassador in history. Sudan’s story has been chronicled in movies, documentaries, news feature segments and innumerable other media platforms. Even before he made his debut on Tinder, this gentle unassuming creature was beloved by the  thousands of visitors who trooped from all over the world to meet him. Presidents, business leaders, conservationists, sports and media personalities and excited schoolchildren  had a transformative experience after meeting him. He was the subject of numerous sculptures, art exhibitions, school projects and even tattoos; all of these being great tributes to the last male standing.

His distinguished but tenuous role was a catalyst for scientists to come up with technological innovations that could potentially bring back northern white rhinos from the brink of extinction. Such advances, for example IVF engineering, may hopefully be used one day in preventing the extinction of other species, breaking new ground in global conservation technology. Yet more credit for Sudan, albeit posthumously.

On the 19th of March, 2018, Sudan died. He had been suffering from age-related health issues and from a series of infection. Once his condition worsened significantly and he was unable to stand up and evidently, suffered a great deal, the decision to euthanise him was made by his veterinary team.

He is survived by his daughter Najin and granddaughter Fatu – now the last two known remaining members of the northern white rhino species.

It is desperately sad to witness the manifestation of human greed in the wiping out of these majestic animals. How many more species that we share this earth with will fall the same way before we understand the enormity of what we are doing?

DONATE IN MEMORY OF SUDAN

Sudan may no longer be with us, but you can help secure his legacy. A donation to support the IVF research will help to ensure that one day in the future, northern white rhinos will once again roam freely in their natural habitat. 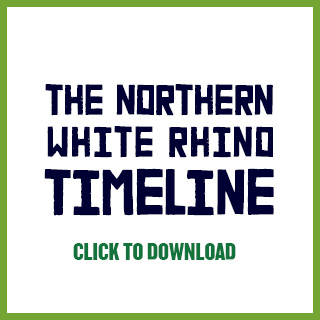 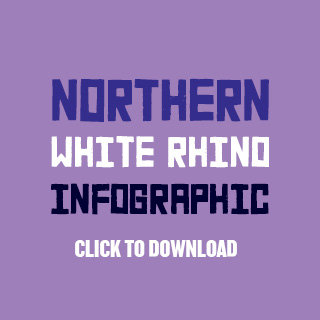