On Wednesday 14th June, Manno felt grass and earth underneath his feet for the first time in his life.

From solitary confinement in a cage in Iraq, to open spaces and a new family in Kenya – Manno continues to amaze us every day with his resilience, bravery and humour. Our experienced keepers at Sweetwaters have taken things very slowly with Manno, allowing him to meet other chimpanzees at his own pace. He is currently in the company of three females (lucky boy!) - Akeela, Jane and Bahati. From their house, there is a tunnel that leads to an outside enclosure. Manno’s keepers wanted to wait until they felt Manno was ready before opening the end of the tunnel that leads outside. Wednesday was that day.

At around 12.55pm, Manno entered the tunnel and paced up and down, taking in the sights and sounds, before retreating back into the house to join his girls. His keepers decided to open up the end, just in case he decided to go back out.
And he did.

At around 1pm, Manno took the plunge and ventured outside. With the support of Akeela, Jane and Bahati, he found the confidence to explore his jungle gym, taste the grass under his feet, and enjoy the freedom of outdoor space for the first time in his life. The four spent the better part of the afternoon outside, with the sun on their backs. 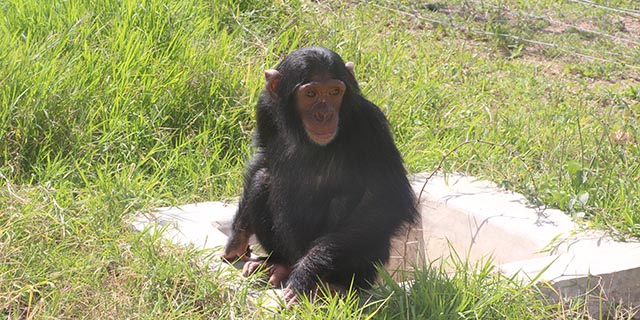 Manno basking in the sun at Sweetwaters

Currently, the males of the group are being kept in a separate enclosure. In the next few days, Manno will be introduced to another female, Tess. Once he’s been introduced to all the females in this way, the process of integrating him into the larger group will begin.

Keep up to date with Manno’s story on our social media, and don’t forget you can support his journey by donating here.