Two young chimps have been seized from traffickers in Qatar, but their whereabouts now is unconfirmed. Help us try and get them to Sweetwaters by writing a letter to the the Director of Protected Areas and Wildlife Department in Qatar. Details below... 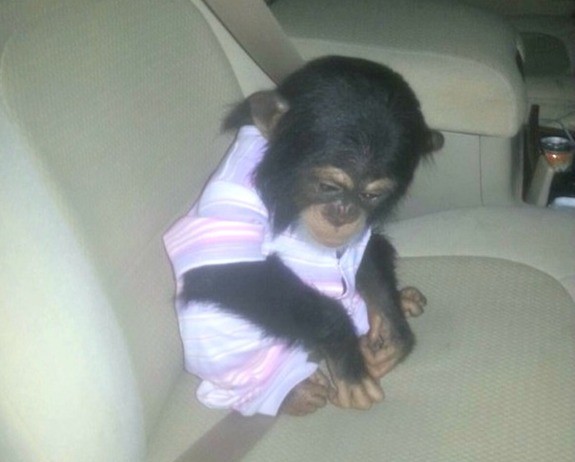 The orphaned chimp seized in March in Qatar

This is the farthest thing from natural a young chimp could possibly experience.

On the 16th March 2016, the Doha News reported that a man had been apprehended by the Department of Environmental Protection for trying to sell a baby chimpanzee. The photograph accompanying the story showed a forlorn young chimpanzee, sitting on a car seat wearing child’s pajamas.

“The pajamas looked familiar” says Dan Stiles, manager of the Project to End Great Ape Slavery (PEGAS), supported by Ol Pejeta. “One of the online traffickers PEGAS has been monitoring, located in Qatar, posted a video on 18th February of a baby chimpanzee with the same pajamas. The size and facial characteristics of the infant in the photograph and video are the same too.” 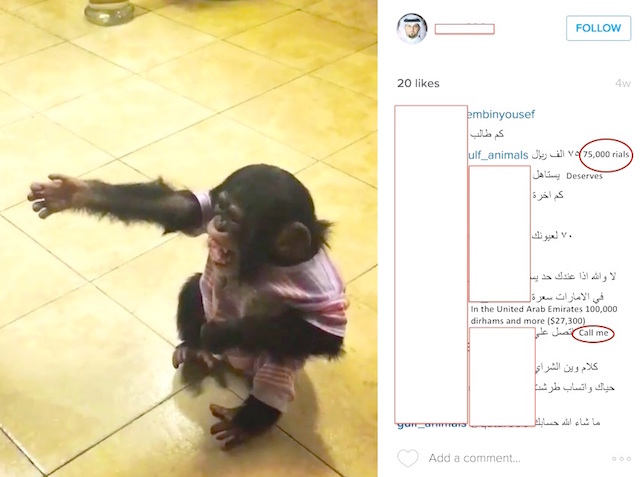 Unashamedly flaunting his illegal wildlife trafficking activities on social media, the man offered the frightened young chimpanzee for 75,000 Qatar rials (about USD 20,600). There were likes and multiple comments on his video, including one from a potential buyer, who asked the dealer to call him. It seems the transaction never went through, as the same chimp was advertised for sale on a well-known Kuwaiti traffickers social media about ten days later.

The Gulf has become a hub for great ape traffickers. Another infant chimpanzee was seized in Doha in November last year, and the trafficker arrested. However, there is no information available as to what happened to the offender, and the chimpanzee was said to have gone to Doha Zoo, but Doha Zoo closed in 2012.

During the course of making enquiries about the Zoo, PEGAS found out that there were three other adult chimps living there before it closed. There are no leads as to where they are now, but PEGAS continues to make enquiries. 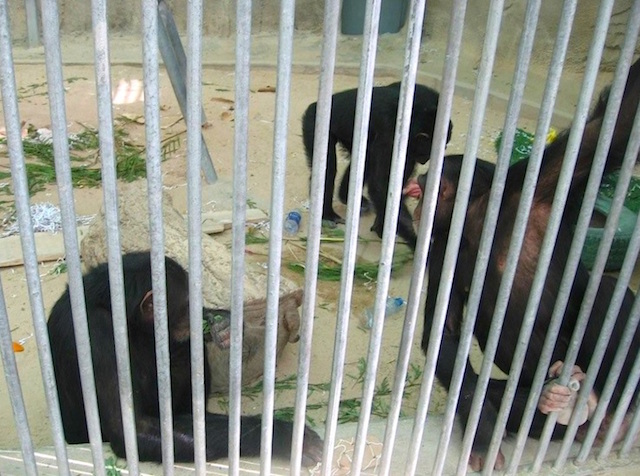 Three chimps at Doha Zoo before it closed in 2012

PEGAS has written to the Qatari CITES office enquiring about the possibility of relocating the seized chimpanzees to Sweetwaters Chimpanzee Sanctuary, but has yet to receive a response. This is where you can help. With enough pressure, the Director of Protected Areas and Wildlife Department in Qatar will have to investigate, and the chimps stand a chance of a new life at Sweetwaters. You can write to:

Politely enquire about the fate of the two seized chimpanzee infants and respectfully suggest that they should be sent to an appropriate facility that can offer secure and nurturing care in the company of other chimpanzees. Ol Pejeta Conservancy is one of the few wildlife establishments in the world that can offer to cover all transport costs, through the PEGAS project, and lifetime care for chimpanzees in need of a home.

“There is hope” says Dan, “in 2001, two baby chimpanzees smuggled in to Qatar with a shipment of birds from Nigeria were sent to Chimfunshi Sanctuary in Zambia.”

Qatar is currently constructing a new zoo and safari park, promised to be the biggest in the region. The new zoo will cover 75 hectares, and will be divided into several regions representing the natural and climatic features of three continents. There will be a combination of drive and walk through exhibits and other facilities. It is expected to open by the end of 2017. 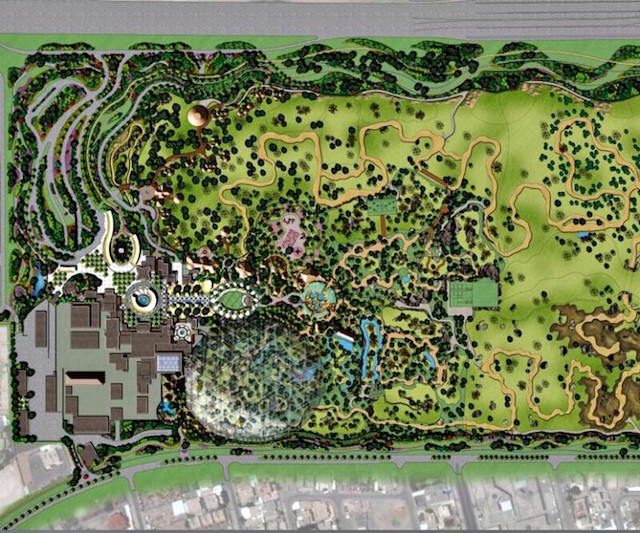 A map of the new Qatar Zoo

Two facilities like this already exist in the UAE; in Dubai and Al Ain Zoos. “Thousands of wild animals are pouring into the Gulf region to supply these new developments. Conservationists concerned about illegal wildlife trade need to monitor the sourcing of these animals carefully.” Says Dan.