On the 14th July, renowned primatologist Dr. Jane Goodall visited Sweetwaters Chimpanzee Sanctuary, accompanied by Director General of the Kenya Wildlife Service, Mr. Kitili Mbathi. While at Sweetwaters, she officially opened the new visitor centre, which will give visitors a more interactive experience, and aims to raise awareness on the plight of chimpanzees in the wild. The project manager of the Ol Pejeta initiated Project to End Great Ape Slavery (PEGAS), Dan Stiles, wrote a blog post about the visit. We share a revised version of it below:

In July 1960, at the age of 26, Jane Goodall travelled from England to what is now Tanzania and courageously entered the extraordinary world of wild chimpanzees. She was equipped with nothing more than a notebook and a pair of binoculars. But with her resolute patience and optimism, she won the trust of these initially wary creatures, and she managed to open a window into their mysterious lives, finding surprising similarities with our own. The public was fascinated and remains so to this day. Her 1971 book, In the Shadow of Man, was an international best-seller.

Today, Jane’s work revolves around inspiring action on behalf of endangered species, particularly chimpanzees, and encouraging people to do their part to make the world a better place for people, animals, and the environment we all share.

The Jane Goodall Institute (JGI), founded in 1977, works to protect the famous chimpanzees of Gombe National Park in Tanzania, where she first began her research 56 years ago, but also supports community-based conservation throughout East Africa and the Congo Basin, engaging with communities to win long-term conservation impact. Jane Goodall’s Roots & Shoots Programme, which Jane started with a group of Tanzanian students in 1991, is today the Institute’s global environmental and humanitarian youth program with nearly 150,000 members in more than 130 countries.

Jane came to Nanyuki, where Ol Pejeta Conservancy is located, to speak at Mount Kenya Safari Club to celebrate the 25th anniversary of the Kenya Roots & Shoots programme. This visit also offered an ideal opportunity for her to return to the Sweetwaters Sanctuary, which was created in 1993 largely through her instigation, in cooperation with KWS and Ol Pejeta Conservancy. The aim is to provide lifelong refuge to orphaned and abused chimpanzees. The first chimpanzees to arrive were individuals that Jane had rescued from horrible conditions of captivity in Burundi.

After officially opening the new Information Centre at Sweetwaters with a chimpanzee hoot, Dan Stiles gave a presentation on the illegal trade in great apes. 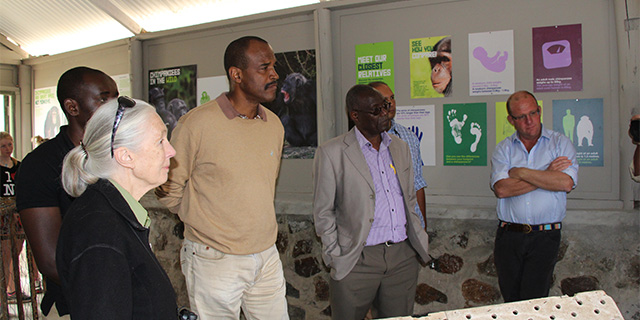 The guests listen keenly to a talk by Dan Stiles on the great ape trade.

For the next two hours they visited both chimpanzee groups, which live in large, fenced enclosures vegetated by natural savanna bushland on opposite sides of the Ewaso Nyiro River. The river acts as a natural barrier to separate the two groups, as chimpanzees cannot swim.

Jane was anxious to see Uruhara, a chimpanzee she had rescued from Burundi more than 20 years ago. When we found him and Jane offered him a banana she remarked, “I wouldn’t have recognized him, he’s aged so much.” After a moment, the 81-year old turned to Dan with a twinkle in her eye and added, “I think I’ve done a bit better.”

Encouraged by the many media journalists who had been attracted by Jane’s visit, she began expertly tossing bananas through the fence wires. Both to protect the chimpanzees from predators – there are about 70 lions and numerous leopards on Ol Pejeta – and to prevent their escape, the 250 acre sanctuary is enclosed by an electrified fence.

Jane requested some privacy from the media and other observers because she wanted a moment alone with the Sweetwaters caretakers. Some of these dedicated and professional staff have been with Sweetwaters since the beginning and Jane wanted to hear from them how the chimpanzees had been faring, what problems there might be, to hear stories of the individual chimpanzees that she had known from many years ago and to share her thoughts and observations with them. To take time out to do this demonstrates the thoughtfulness and care for others that this extraordinary woman has.

During lunch at Morani’s, Dan had the opportunity to discuss the Project to End Great Ape Slavery with Jane and Kitili. Both were very supportive.

It was an honour and great pleasure to host two such positive, outspoken and yet modest advocates for wildlife conservation at Ol Pejeta Conservancy.