NPR stands for National Police Reservists. Rangers with NPR status are allowed to carry government-authorised firearms, after undergoing paramilitary training. Ol Pejeta’s NPR team are on the front line against poachers, but while their primary focus in wildlife protection, they also play a crucial role in assisting local communities and police with livestock theft, or human/wildlife conflict situations. The NPR team also operates a full-fledged dog unit; with highly trained dog handlers who manage attack and sniffer dogs.

The Rhino Protection Unit (RPU) specializes in wildlife monitoring and general security surveillance. They are primarily deployed to track and record rhino sightings. For peace of mind, the RPU have a rule that every black rhino on Ol Pejeta must be sighted at least once every three days. The Unit cover vast areas of the Conservancy, and are often the first people to detect any security threats, fence breakages or wildlife in distress.

Ol Pejeta’s security teams have earned a reputation in Laikipia as being highly efficient teams with great morale. Under their watch, the number of black rhino increased from 86 in 2011 to 134 today. Relations with surrounding communities are strong – insecurity incidents in local towns have dropped significantly with help from Ol Pejeta NPR, and this has created a strong relationship between Ol Pejeta and its neighbours.

This relationship also allows the NPR and the RPU teams to develop a solid network of intelligence sources. They also maintain good partnerships with local government authorities, enabling effective intelligence sharing for more efficient security in the region. 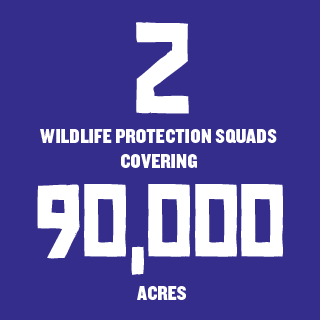