There is no better gift than one that lasts a lifetime, and here on Ol Pejeta, we’re offering you the chance to give your kids, friends or relatives one of the most unique gifts they’ll ever receive — a rhino. Don’t worry, you don’t have to dismantle your front door to get it in to the living room, you can adopt and name a rhino on Ol Pejeta and be a part of their conservation success story. There are 36 rhinos waiting to be named, and for a discounted rate of just US$500 you can choose a name in honour of a friend or a memory that will last for the rhino’s entire life. When we say memory, we’re not necessarily suggesting you call a rhino "What-happened-in-vegas", but it’s entirely up to you! 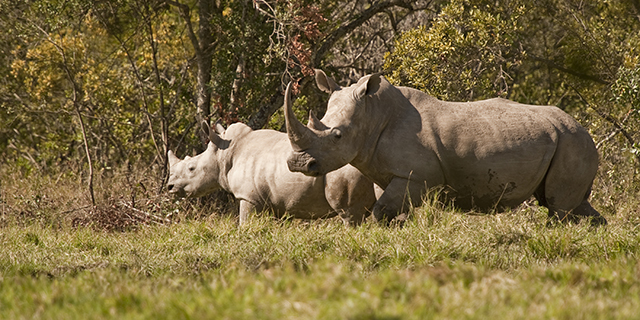 The poaching crisis continues to threaten our rhino population, and we strive to invest everything we can in keeping our rhinos safe. Security costs Ol Pejeta an average of $10,000 per rhino per year, and with 145 rhinos to keep safe - we need your help. Your naming donation will help pay ranger’s salaries, cover emergency veterinary treatment for sick and injured rhinos, and help us maintain the radios, motion-sense cameras and other rhino monitoring technology. There are 30 black rhinos and 6 white rhinos available for naming. To take advantage of this unique opportunity, please contact jerry.sellanga@olpejetaconservancy.org for more information.

It all began with four black rhinos in 1989. Today, Ol Pejeta is the largest black rhino sanctuary in east Africa, with 113 healthy, happy black rhinos. This isn’t just down to our dedicated wildlife ranger teams providing 24/7 security. We wouldn’t be where we are today without the partnerships we have built - with neighbouring communities, tourism partners, international institutions and donors. This #WorldRhinoDay, we reflect on our rhino population trends, and look to the future.

With 10 black and 3 white rhino births so far in 2017, the Ol Pejeta rhino population is increasing rapidly. Our black rhino numbers would have been higher than the current 113 if it hadn’t been for pride of 11 lions, who hunted 10 rhinos (mostly calves and sub-adults) over the course of the year. We worked with the Kenya Wildlife Service to translocate the pride to a National Park, and the rhino predation has stopped. Despite this loss, Ol Pejeta remains one of only 9 ‘Key 1’ black rhino populations on the continent.

Approximately 55% of our black rhinos are female, and 80% are under the age of 20. If current trends continue, we expect to hit our carrying capacity of 120 black rhinos in the next year or two. This is a fantastic dilemma, and one many long-term Ol Pejeta staff never thought we would reach.

Globally, territories for all 5 rhino subspecies are shrinking and human population growth drives habitat fragmentation and competition for resources. As Ol Pejeta’s black rhino numbers increase, our challenge is not only to increase our security in parallel, but to secure more habitat for black rhinos when our carrying capacity is reached. In 2012, Ol Pejeta took over the management of the neighbouring Mutara Conservancy from the Government. This secured 20,000 acres as a rhino dispersal area, and reflected the importance the Kenyan government placed on black rhino conservation. Mutara Conservancy will be managed much like Ol Pejeta, with a view to maximise land productivity, earn sustainable revenue and support communities along its borders. Fencing of the conservancy began earlier this year with support from Ernest Kleinwort Foundation, WildAid, Laikipia County Government, Space for Giants and Jambo Mutara Camp. The African Wildlife Foundation have also provided housing and uniforms for wildlife patrolmen stationed in Mutara, and we have secured funding through the Darwin Grant towards community outreach, sustainable grazing and pasture rehabilitation programmes.

ALL YOU NEED TO KNOW ABOUT OUR NORTHERN WHITE RHINOS 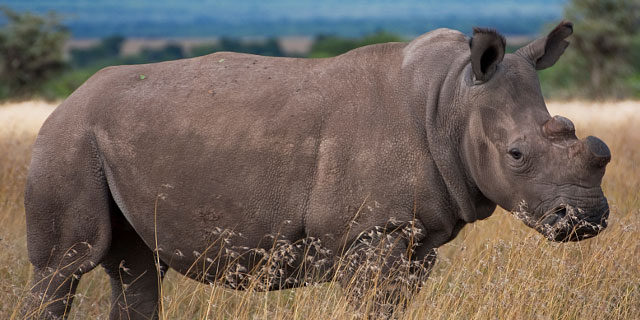 There would not be any rhinos left if it weren't for wildlife rangers. On Ol Pejeta, our dedicated team of rangers put themselves on the front line everyday to keep our rhinos and other wildlife safe. As poachers become increasingly sophisticated in their weaponry and tactics, our rangers constantly have to be at the top of their game, mentally and physically, usually in tough environments. We have over 200 patrolmen, 40 armed rangers and a dedicated K-9 unit, and this World Rhino Day we salute them all for the incredible work they do.

Download our World Rhino Day poster for your children, no matter what age, and while they are colouring it "take home" the message that everyone has a role to play in saving the world's rhinos. Because no one should live in a world without rhinos, get your children involved right now. It is never too early to instil an appreciation for rhinos and their unique adaptations along with an understanding of the conservation issues rhinos face in the wild and why we must help protect them.Your children are the next generation of conservationists, so don't wait and get them excited about World Rhino Day.