We work with many conservation heroes but not many are 13 years old. Last year we received a generous donation for our armed rangers from a passionate young girl – Mikayla Wissanji. At just 11 years old, a school visit to Ol Pejeta enlightened her on the plight of endangered animals and she decided that she had to do something about it. A couple of years later, conservationist Resson Kantai Duff gave a talk at Mikayla’s school which pushed Mikayla to start her initiative ‘Breathe’ to raise awareness and funds for conservation. 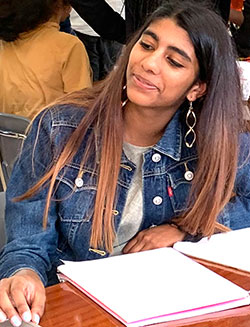 The initiative started with making items like bracelets and paintings. Eventually, Mikayla had an idea to organise a fundraising concert with the help of her teachers, classmates, friends and invited our managing director Richard Vigne to be the guest of honour. The evening featured performances from her peers and ended with a speech from Mikayla and Richard. A portion of sales of tickets from this event was donated to our armed rangers, while the rest went to children from an organisation called Ghetto Classics, an initiative of the Art of Music Foundation in Kenya. They work to support and looks after some of the poorest and most underprivileged children in one of Nairobi’s largest slums. With Mikayla’s donation we were able to purchase training shoes for our armed rangers. These trainings are done daily and are key in keeping our rangers equipped with the necessary skills they need while out patrolling for possible intrusions, and in the capture of poachers.

Thank you, Mikayla. We hope that others follow your lead and take an active role in taking care of our wildlife